The ultimate wellbeing culprit is neither money nor the pursuit of it, but whether or not you believe your life has meaning and purpose. And according to one vast, worldwide survey, the residents of wealthy countries rate their lives as less meaningful than those in poor countries.

One reason money doesn’t make us happy is the stress of making it. The following is from Plutocrats:  The Rise of the new Global Super Rich and the Fall of Everyone Else, Chrystia Freeland (2012): 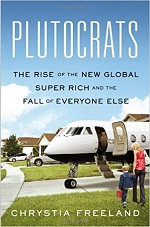 “Until a few years ago, the reigning theory about money and happiness was the Easterlin paradox, the 1974 finding by Richard Easterlin that, beyond a relatively low threshold more money didn’t make you happier.

“But across countries, what millions of immigrants have always known to be true really is:  the people of rich countries are generally happier than the people of poor countries.

“The latest contrarian finding, however, is that moving to that state of greater wealth and greater happiness is decidedly unpleasant. As Angus Deaton, in a review of the 2006 Gallup World Poll, concluded, ‘Surprisingly, at any given level of income, economic growth is associated with lower reported levels of life satisfaction.’”

Freeland also cites Angus Deaton for showing that “the richer you are, the more covetous you become” — not a likely prescription for happiness.

A 2014 U of Virginia/ Gallup study weighed in with similar findings — Emily Esfahani Smith discussed them in The Power of Meaning:  Crafting a Life That Matters, (2017: 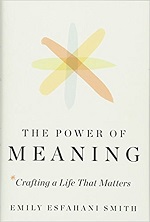 “Though the study was enormous, involving nearly 140,000 people across 132 countries, it was also straightforward. A few years earlier, researchers from Gallup had asked respondents whether they were satisfied with their lives, and whether they felt their lives had an important purpose or meaning. [Prof. Shigehiro Oishi of the University of Virginia and Ed Diener of Gallup] analyzed that data by country, correlating the levels of happiness and meaning with variables like wealth, rates of suicides, and other social factors.

“Their findings were surprising. People in wealthier regions, like Scandinavia, reported being happier than those in poorer ones, like sub-Saharan Africa. But when it came to meaning, it was a different story. Wealthy places like France and Hong Kong had some of the lowest levels of meaning, while the poor nations of Togo and Niger had among the highest, even though people living there were some of the unhappiest in the study.

I.e., the ultimate wellbeing culprit is neither money nor the pursuit of it, but whether or not you believe your life has meaning and purpose. And according to this vast, worldwide survey, the residents of wealthy countries rate their lives as less meaningful than those in poor countries.

Analogizing from these findings to the legal profession, we would expect that, because the legal profession runs on the higher side of financial wellbeing, lawyers would report higher levels of happiness than less well-paid workers, but would also suffer from meaning malaise. And, since one of the wellbeing factors used in the survey was rates of suicide, we would also expect lawyers to have a correspondingly higher rate of suicide.

The high lawyer suicide rate (third highest among professionals, after doctors and dentists) has been well documented, and as we’ve been seeing, lawyers as a whole aren’t generally happy with their lives either, despite their profession’s higher rate of wealth.

We’ll look more into the meaning part of the equation next time.

Richard Easterlin is a professor of economics at USC. Sir Angus Stewart Deaton, FBA, is a British American economist and professor at Princeton. In 2015, he was awarded the Nobel Memorial Prize in Economic Sciences for his analysis of consumption, poverty, and welfare.

For a summary of the UVA/Gallup study, see ScienceDaily, 18 December 2013:  “Residents of poorer nations find greater meaning in life.” For the original study, see S. Oishi, E. Diener, “Residents of Poor Nations Have a Greater Sense of Meaning in Life Than Residents of Wealthy Nations,” Psychological Science, 2013

One thought on “Money, Happiness, Wealth, and Meaning”