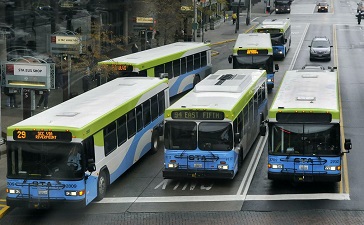 Every day I ride a bus that has a row of seats up front that are folded up, with a sign next to them:

NOTICE
Seats Not in Service
The bus manufacturer has determined
that these seats not be used.

I’ve seen that sign for over a year. Never really thought about it. But recently I wondered:  you don’t suppose both those seats and the sign were installed in the factory? It could happen — cheaper than a recall maybe. If so, it would be right in line with this week’s topic:  a kind of on-the-job behavior that professors and business consultants Mats Alvesson and André Spicer[1] call The Stupidity Paradox. 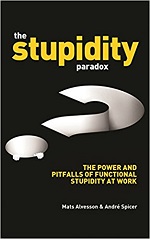 Their book by that name began when they were sharing a drink after a conference and found themselves wondering, “Why was it that organisations which employed so many smart people could foster so much stupidity?” They concluded that the cause is “functional stupidity” — a workplace mindset implicitly endorsed because it works.

“We realized something:  smart organisations and the smart people who work in them often do stupid things because they work — at least in the short term. By avoiding careful thinking, people are able to simply get on with their job. Asking too many questions is likely to upset others — and to distract yourself. Not thinking frees you up to fit in and get along. Sometimes it makes sense to be stupid.”

In fact, stupidity works so well it can turn into firm culture:

“Far from being ‘knowledge intensive,’ many of our most well-known chief organisations have become engines of stupidity. We have frequently seen otherwise smart people stop thinking and start doing stupid things. They stop asking questions. They give no reasons for their decisions. They pay no heed to what their actions cause. Instead of complex thought we get flimsy jargon, aggressive assertions or expert tunnel vision. Reflection,, careful analysis and independent reflection decay. Idiotic ideas and practices are accepted as quite sane. People may harbour doubts, but their suspicions are cut short. What’s more, they are rewarded for it. The upshot is a lack of thought has entered the modus operandi of most organisations of today.”

I.e., it pays to be stupid on the job:  you get things done, satisfy expectations, don’t stand out from the crowd, aren’t labelled a troublemaker. We learned all of that in middle school; we learn it again on the job.

We learn from management:

“A central, but often unacknowledged, aspect of making a corporate culture work is what we call stupidity management. Here managers actively encourage employees not to think too much. If they do happen to think, it is best not to voice what emerges. Employees are encouraged to stick within clearcut parameters. Managers use subtle and not so subtle means to prod them not to ask too many tough questions, not to reflect too deeply on their assumptions, and not to consider the broader purpose of their work. Employees are nudged to just get on with the task. They are to think on the bright side, stay upbeat and push doubts and negative thoughts aside.”

And then we school ourselves:

“Self-stupifying starts to happen when we censor our own internal conversations. As we go through our working day, we constantly try to give some sense to our often chaotic experiences. We do this by engaging in what some scholars call ‘internal reflexivity’. This is the constant stream of discussion that we have with ourselves. When self-stupidification takes over, we stop asking ourselves questions. Negative or contradictory lines of thinking are avoided. As a result, we start to feel aligned with the thoughtlessness we find around us. It is hard to be someone who thinks in an organization that shuns it.”

Back to the seats on my bus… A “manufacturer” is a fiction, like “corporation” is a fiction:  both act through humans. Which means that somewhere there’s an employee at a bus manufacturer whose job is to build those seats. Someone else installs them. Someone else puts up the sign. And lots of other people design, requisition, select, negotiate, buy, ship, pack and unpack, file, approve, invoice, pay bills, keep ledgers, maintain software, write memos, confer with legal, hold meetings, and make decisions. All so that the “manufacturer” — i.e., the sum total of all those people doing their jobs — can tell me not to sit there. I’m guessing there was a better way, but that worked.

Functional stupidity is as common as traffic on your commute. We’ll look more into it next time.