It’s been a good month for optimists in my reading pile. Utopia is already here, they say, and we’ve got the facts to prove it. 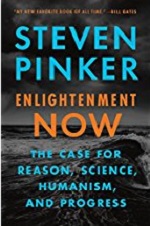 Pinker begins cautiously:  “The second half of the second decade of the third millennium would not seem to be an auspicious time to publish a book on the historical sweep of progress and its causes,” he says, and follows with a recitation of the bad news sound bytes and polarized blame-shifting we’ve (sadly) gotten used to. But then he throws down the optimist gauntlet: “In the pages that follow, I will show that this bleak assessment of the state of the world is wrong. And not just a little wrong — wrong, wrong, flat-earth wrong, couldn’t-be-more-wrong wrong.”

He makes his case in a string of data-laced chapters on progress, life expectancy, health, food and famine, wealth, inequality, the environment, war and peace, safety and security, terrorism, democracy, equal rights, knowledge and education, quality of life, happiness, and “existential” threats such as nuclear war. In each of them, he calls up the pessimistic party line and counters with his version of the rest of the story.

And then, just to make sure we’re getting the point, 322 pages of data and analysis into it, he plays a little mind game with us. First he offers an eight paragraph summary of the prior chapters, then starts the next three paragraphs with the words “And yet,” followed by a catalogue of everything that’s still broken and in need of fixing. Despite 322 prior pages and optimism’s 8-3 winning margin, the negativity feels oddly welcome. I found myself thinking, “Well finally, you’re admitting there’s a lot of mess we need to clean up.” But then Prof. Pinker reveals what just happened:

“The facts in the last three paragraphs, of course, are the same as the ones in the first eight. I’ve simply read the numbers from the bad rather the good end of the scales or subtracted the hopeful percentages from 100. My point in presenting the state of the world in these two ways is not to show that I can focus on the space in the glass as well as on the beverage. It’s to reiterate that progress is not utopia, and that there is room — indeed, an imperative — for us to strive to continue that progress.”

Pinker acknowledges his debt to the work of Swedish physician, professor of global 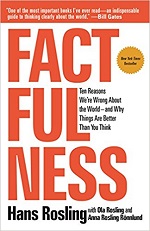 health, and TED all-star Hans Rosling and his recent bestselling book Factfulness. Prof Rosling died last year, and the book begins with a poignant declaration:  “This book is my last battle in my lifelong mission to fight devastating ignorance.” His daughter and son-in-law co-wrote the book and are carrying on his work — how’s that for commitment, passion, and family legacy?

The book leads us through ten of the most common mind games we play in our attempts to remain ignorant. It couldn’t be more timely or relevant to our age of “willful blindness,” “cognitive bias,” “echo chambers” and “epistemic bubbles.”

Also this week, professional skeptic Michael Shermer weighed in on the positive side of 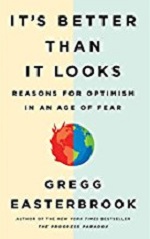 the scale with his review of a new book by journalist Gregg Easterbrook — It’s Better Than It Looks. Shermer blasts out of the gate with “Though declinists in both parties may bemoan our miserable lives, Americans are healthier, wealthier, safer and living longer than ever.” He also begins his case with the Obama quote above, and adds another one:

“As Obama explained to a German audience earlier that year:  ‘We’re fortunate to be living in the most peaceful, most prosperous, most progressive era in human history,’ adding ‘that it’s been decades since the last war between major powers. More people live in democracies. We’re wealthier and healthier and better educated, with a global economy that has lifted up more than a billion people from extreme poverty.’” 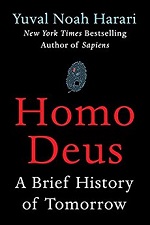 Gates’ favorite books of all time). The optimist case has been showing up elsewhere in my research, too. Who knows, maybe utopia isn’t such a bad idea after all. In fact, maybe it’s already here.

All this ferocious optimism has been bracing, to say the least — it’s been the best challenge yet to what was becoming a comfortably dour outlook on economic reality.

And just as I was beginning to despair of anyone anywhere at any time ever using data to make sense of things, I also ran into an alternative to utopian thinking that both Pinker and Shermer acknowledge. It’s called “protopia,” and we’ll look at it next time.