I had a different post planned for this week, but then I heard a song over the gym soundtrack last week that perfectly illustrates the dynamics of social capital and upward mobility and the perils of the rags-to-riches journey. It also captures an attitude that often accompanies that feeling of having your nosed pressed up against the glass:  wanting to move up but feeling blocked. That’s a lot of economics to pack into one pop song, so I just had to feature it.

I talked about all of that in the very first post in this series just a bit over a year ago, when I wondered out loud whether money can make us happy:

“I mean, all these famous (and mostly rich) people are entitled to their opinion,  but  we’d like to find out for ourselves if money could make us happy — we’re pretty sure we could handle it.”

Rapper Travie McCoy was pretty sure he could handle it, too. He wrote a song saying so — the one I heard at the gym —  then lived his own upward mobility rise, fall, and eventual comeback. His experience couldn’t be more different than that of the 9.9 percenters we heard from last week. Apparently the social capital of the pop music red velvet rope club isn’t the same as the club covered by Forbes.

McCoy teamed up with Bruno Mars to do the song back in 2010. Obama was president, we were just coming off the Great Recession, it was five years after Hurricane Katrina and four years before Bruno Mars did his first Super Bowl halftime. Last time I checked, the song’s official video was closing in on 330 Million views. Obviously it hit a sweet spot. The song made an appearance on Glee– the unofficial version I found had nearly a million views — more hitting a sweet spot.

Judging from what happened next, McCoy might have been wrong about whether he could handle it. A “whatever  happened to Travie McCoy?” search suggests his big hit didn’t give him the life or make him the person he visualized in the song. Among other things, there was a steep decline into opioid then heroin addiction, but since then he has clawed his way back into the music scene.

We’ll let the song deliver its economic lessons on its own terms. If you want to take a short break for a catchy tune, you can watch either the official video or the unofficial Glee version below. (The latter is an excellent cover, with the lyrics spruced up for prime time TV, as reflected below.) 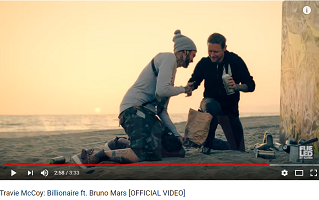 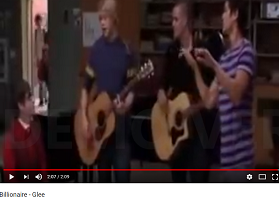 Oh every time I close my eyes
I see my name in shining lights
Yeah, a different city every night oh right
I swear the world better prepare
For when I’m a billionaire

Yeah I would have a show like Oprah
I would be the host of everyday Christmas
Give Travie a wish list
I’d probably pull an Angelina and Brad Pitt
And adopt a bunch of babies that ain’t never had **it
Give away a few Mercedes like here lady have this
And last but not least grant somebody their last wish
It’s been a couple months that I’ve been single so
You can call me Travie Claus minus the Ho Ho
Get it, hehe, I’d probably visit where Katrina hit
And damn sure do a lot more than FEMA did
Yeah can’t forget about me stupid
Everywhere I go Imma have my own theme music

I’ll be playing basketball with the President
Dunking on his delegates
Then I’ll compliment him on his political etiquette
Toss a couple milli in the air just for the heck of it
But keep the five, twenties tens and bens completely separate
And yeah I’ll be in a whole new tax bracket
We in recession but let me take a crack at it
I’ll probably take whatever’s left and just split it up
So everybody that I love can have a couple bucks
And not a single tummy around me would know what hungry was
Eating good sleeping soundly
I know we all have a similar dream
Go in your pocket pull out your wallet
And put it in the air and sing

I wanna be a billionaire so frickin’ bad!

More upward mobility stories coming up — one of them is my own.