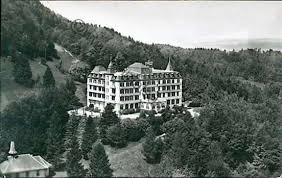 In 1947, economists  Friedrich Hayek, Frank Knight, Karl Popper, Ludwig von Mises, George Stigler and Milton Friedman convened the Mont Pelerin Society in a castle/hotel overlooking Lake Geneva, with the express intent of displacing the Keynesian economic model that prescribed government intervention and spending to pull America out of the Great Depression and install the New Deal. The Society’s founding Statement of Aims is forcefully idealistic:

“The central values of civilization are in danger.  Over large stretches of the Earth’s surface the essential conditions of human dignity and freedom have already disappeared.  In others they are under constant menace from the development of current tendencies of policy.  The position of the individual and the voluntary group are progressively undermined by extensions of arbitrary power.  Even that most precious possession of Western Man, freedom of thought and expression, is threatened by the spread of creeds which, claiming the privilege of tolerance when in the position of a minority, seek only to establish a position of power in which they can suppress and obliterate all views but their own.”

The Statement goes on to carefully position the Society’s purpose as fostering intellectual inquiry, not the advancement of a new economic “orthodoxy.” In time, however, Milton Friedman did precisely that, championing capitalist free market economics through the Chicago School of Economics.

“The core of [the school’s teaching on the free market] was that the economic forces of supply, demand, inflation and unemployment were like the forces of nature, fixed and unchanging. In the truly free market imagined in Chicago classes and texts, these forces existed in perfect equilibrium, supply communicating with demand the way the moon pulls the tides

“Just as ecosystems self-regulate, keeping themselves in balance, the market, left to its own devices, would create just the right number of products at precisely the right prices, produced by workers at just the right wages to buy those products — an Eden of plentiful employment, boundless creativity and zero inflation.

“For this reason, Chicagoans did not see Marxism as their true enemy. The real source of the trouble was to be found in the ideas of Keynesians in the United States, the social democrats in Europe, and developmentalists in what was then called the Third World. These were believers not in a utopia but in a mixed economy, to Chicago eyes an ugly hodgepodge of capitalism for the manufacture and distribution of consumer products, socialism in education, state ownership for essentials like water service, and all kinds of law designed to temper the extremes of capitalism.

“The Chicagoans declared war  of those mix-and-match economists. What they wanted was not a revolutions exactly but a capitalists Reformation:  a return to uncontaminated capitalism.”

The Shock Doctrine:  The Rise of Disaster Capitalism, Naomi Klein (2017)

Compare that vision to that of the Democratic Socialists of America we met last time, whose Constitution unreservedly advances their own counter-orthodoxy:

“We are socialists because we reject an economic order based on private profit, alienated labor, gross inequalities of wealth and power, discrimination based on race, sex, sexual orientation, gender expression, disability status, age, religion, and national origin, and brutality and violence in defense of the status quo. We are socialists because we share a vision of a humane social order based on popular control of resources and production, economic planning, equitable distribution, feminism, racial equality and non-oppressive relationships. We are socialists because we are developing a concrete strategy for achieving that vision, for building a majority movement that will make democratic socialism a reality in America. “

Thus the free market and socialism champions have planted their flags at the poles of the economic ideological spectrum. In between, however, are those whose perspective and goals are more immediate and  pragmatic, such as greater economic equality, improved public access to healthcare (see endnote below[1]) and education unencumbered with government-financed debt.

“Socialism historically has been associated with the concept of public or collective ownership of property and natural resources and has long been associated with Marxism and communism. In 1949, with the Chinese Communists just having taken control of China, and with the Communist Soviet Union creating fear of an aggressive effort to spread their ideology around the globe, Americans’ view of the term embraced the classic elements bound up in these types of movements.

“Now, almost 70 years later, Americans’ views of socialism have broadened. While many still view socialism as government control of the economy, as modified communism and as embodying restrictions on freedoms in several ways, an increased percentage see it as representing equality and government provision of benefits.”

Meanwhile, Millennials’ interest in this more temperate version of socialism is increasingly putting their free market elders in an awkward position:

“Perhaps the most significant thing about the rise of millennial socialism in the US is that it is forcing conservatives to articulate what exactly is so bad about a more equal system – often with results that are beyond parody.

“A writer for the ultra-conservative website the Daily Caller, for example, recently attended an Ocasio-Cortez rally and reported, completely straight-faced: “I saw something truly terrifying. I saw just how easy it would be … as a parent, to accept the idea that my children deserve healthcare and education.

“Kids deserving healthcare, imagine that! It’s a slippery slope, it really is.”

What is going on, that a parent would say something like that? Digging deeper reveals a dynamic at work that is more powerful than a generation gap, polarized ideologies, or campaign issues such as healthcare. We’ll look into that next time.

[1] For those leaning toward socialism’s new version, the leading issue is healthcare. See also these Gallup survey results announced November 12, 2019:  “More than 13% of American adults — or about 34 million people — report knowing of at least one friend or family member in the past five years who died after not receiving needed medical treatment because they were unable to pay for it… Dovetailing with these results is a rising percentage of adults who report not having had enough money in the past 12 months to ‘pay for needed medicine or drugs that a doctor prescribed’ to them. This percentage has increased significantly, from 18.9% in January 2019 to 22.9% in September. In all, the 22.9% represents about 58 million adults.”