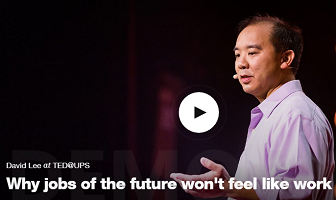 Last time, we heard David Lee[1] express his conviction that, far from destroying human jobs, robotic technology will unleash human creativity on a wonderful new world of work. His perspective is so remarkably and refreshingly upbeat that I thought we’d let him continue where he left off last week:

“I think it’s important to recognize that we brought this problem on ourselves. And it’s not just because, you know, we are the one building the robots. But even though most jobs left the factory decades ago, we still hold on to this factory mindset of standardization and de-skilling. We still define jobs around procedural tasks and then pay people for the number of hours that they perform these tasks. We’ve created narrow job definitions like cashier, loan processor or taxi driver and then asked people to form entire careers around these singular tasks.

“These choices have left us with actually two dangerous side effects. The first is that these narrowly defined jobs will be the first to be displaced by robots, because single-task robots are just the easiest kinds to build. But second, we have accidentally made it so that millions of workers around the world have unbelievably boring working lives.

“Let’s take the example of a call center agent. Over the last few decades, we brag about lower operating costs because we’ve taken most of the need for brainpower out of the person and put it into the system. For most of their day, they click on screens, they read scripts. They act more like machines than humans. And unfortunately, over the next few years, as our technology gets more advanced, they, along with people like clerks and bookkeepers, will see the vast majority of their work disappear.

“To counteract this, we have to start creating new jobs that are less centered on the tasks that a person does and more focused on the skills that a person brings to work. For example, robots are great at repetitive and constrained work, but human beings have an amazing ability to bring together capability with creativity when faced with problems that we’ve never seen before.

“We need to realistically think about the tasks that will be disappearing over the next few years and start planning for more meaningful, more valuable work that should replace it. We need to create environments where both human beings and robots thrive. I say, let’s give more work to the robots, and let’s start with the work that we absolutely hate doing. Here, robot, process this painfully idiotic report.

“And for the human beings, we should follow the advice from Harry Davis at the University of Chicago. He says we have to make it so that people don’t leave too much of themselves in the trunk of their car. I mean, human beings are amazing on weekends. Think about the people that you know and what they do on Saturdays. They’re artists, carpenters, chefs and athletes. But on Monday, they’re back to being Junior HR Specialist and Systems Analyst 3.

“You know, these narrow job titles not only sound boring, but they’re actually a subtle encouragement for people to make narrow and boring job contributions. But I’ve seen firsthand that when you invite people to be more, they can amaze us with how much more they can be.

“[The key is]to turn dreams into a reality. And that dreaming is an important part of what separates us from machines. For now, our machines do not get frustrated, they do not get annoyed, and they certainly don’t imagine.

“But we, as human beings — we feel pain, we get frustrated. And it’s when we’re most annoyed and most curious that we’re motivated to dig into a problem and create change. Our imaginations are the birthplace of new products, new services, and even new industries.

“If we really want to robot-proof our jobs, we, as leaders, need to get out of the mindset of telling people what to do and instead start asking them what problems they’re inspired to solve and what talents they want to bring to work. Because when you can bring your Saturday self to work on Wednesdays, you’ll look forward to Mondays more, and those feelings that we have about Mondays are part of what makes us human.”

We’ll give the other side equal time next week.

[1] David Lee is Vice President of Innovation and the Strategic Enterprise Fund for UPS.