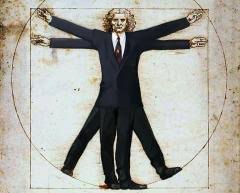 The concept of “homo economicus” captures the belief that the rigorous pursuit of self-interest in a free market improves things for everyone. This belief powered Milton Friedman’s famous dictum that “the social responsibility of business is to increase profits,” and finds a philosophical ally in Ayn Rand’s “objectivism”:

“The core of Rand’s philosophy… is that unfettered self-interest is good and altruism is destructive. [The pursuit of self-interest], she believed, is the ultimate expression of human nature, the guiding principle by which one ought to live one’s life. In “Capitalism: The Unknown Ideal,” Rand put it this way:

‘Collectivism is the tribal premise of primordial savages who, unable to conceive of individual rights, believed that the tribe is a supreme, omnipotent ruler, that it owns the lives of its members and may sacrifice them whenever it pleases.’

“By this logic, religious and political controls that hinder individuals from pursuing self-interest should be removed.”

What Happens When You Believe in Ayn Rand and Modern Economic Theory, Evonomics (Feb. 17, 2016)

Thus Ayn Rand became the patron saint of American capitalism in its current iteration. This is from a 2017 Atlantic article:

“’I grew up reading Ayn Rand,’ … Paul Ryan has said, ‘and it taught me quite a bit about who I am and what my value systems are, and what my beliefs are.’ It was that fiction that allowed him and so many other higher-IQ Americans to see modern America as a dystopia in which selfishness is righteous and they are the last heroes. ‘I think a lot of people,’ Ryan said in 2009, ‘would observe that we are right now living in an Ayn Rand novel.’”

Critics point out that there is no such thing as a free market or objectively rational self-interest, arguing instead that the market is inescapably skewed toward policy-makers’  beliefs and values — i.e., their particular interpretations of what “self-interested” behavior looks like.[1] As a result, economic policy always comes laden with ethical and moral beliefs about “good” vs. “bad” outcomes, which the not-so-free market then dutifully delivers:

“Milton Friedman argued that competition between big businesses suffices to safeguard the public interest, but in practice it is almost always insufficient, especially where there is collusion among the players to safeguard their market dominance – and their political influence.

“Free-market economists have an unwarranted faith in the capacity of price adjustments to produce technological changes in production and patterns of consumer demand. Their theories imply that the price system has infinite capacity to shape sustainable outcomes.

“But if the self-interested market behaviours continue to seek an unchanged goal – more personal incomes with which to purchase more material goods – ultimately they cannot be fulfilled.

“Ultimately, the short-term self-interested economic arrangements are not sustainable anyway. As the US economist Kenneth Boulding once said: “Anyone who believes that exponential growth can go on forever in a finite world is either a madman or an economist”.

“Economic inequalities also predictably widen where self-interested market behaviours dominate. Capital makes capital, while those without capital often remain consigned to poverty. Certainly, the very rich have become notably much wealthier during the last three decades while neoliberal ideologies and policies have been dominant. In the absence of strong unions and governments committed to some degree of egalitarian redistribution, the unequalising tendency is inexorable. The result is predictably unhappier societies that experience a higher incidence of social problems, as empirical research complied by Richard Wilkinson and Kate Pickett clearly demonstrates.

“Something has to give. An economic system that rewards amoral self-interest creates economic instability, fractures economic insecurity, fosters concentrations of economic power, exacerbates economic inequality and violates ecological sustainability. So much for the self-regulating market economy!

“There is currently much talk of ‘social responsibility’ in business and of ‘triple bottom line accounting’ that emphasises the use of social and environmental criteria, as well as a financial criterion, in assessing business performance… Indeed, businesses developing reputations for responsible behaviours may reap benefits in the form of worker and customer loyalty. But unless and until ethical behaviours become integral to how markets function – by directly affecting ‘shareholder value’, for example – it is hard to see the overall effect as much more than window dressing for ‘business as usual’.”

Oh, The Morality: Why Ethics Matters In Economics, The Conversation (in partnership with the University of Sydney) (March 22, 2012)

More on ethics and economics next time.

[1] For more on whether the market is truly “free,” see this article and this one. Or if you prefer, here’s a short video and here’s a TEDX talk.

John Stuart Mill coined the term homo economicus to explain economic behavior. This is from . Investopedia:

“Homo economicus, or ‘economic man,’ is the characterization of man in some economic theories as a rational person who pursues wealth for his own self-interest. The economic man is described as one who avoids unnecessary work by using rational judgment. The assumption that all humans behave in this manner has been a fundamental premise for many economic theories.

“The history of the term dates back to the 19th century when John Stuart Mill first proposed the definition of homo economicus. He defined the economic actor as one “who inevitably does that by which he may obtain the greatest amount of necessaries, conveniences, and luxuries, with the smallest quantity of labor and physical self-denial with which they can be obtained.”

“The idea that man acts in his own self-interest often is attributed to other economists and philosophers, like economists Adam Smith and David Ricardo, who considered man to be a rational, self-interested economic agent, and Aristotle, who discussed man’s self-interested tendencies in his work Politics. But Mill is considered the first to have defined the economic man completely.”

Homo economicus says the rational approach to commerce is to seek the most for the least. The idea has its detractors:

“The theory of the economic man dominated classical economic thought for many years until the rise of formal criticism in the 20th century.

“One of the most notable criticisms can be attributed to famed economist John Maynard Keynes. He, along with several other economists, argued that humans do not behave like the economic man. Instead, Keynes asserted that humans behave irrationally. He and his fellows proposed that the economic man is not a realistic model of human behavior because economic actors do not always act in their own self-interest and are not always fully informed when making economic decisions.”[1]

“It was a fundamental mistake … to interpret economics as the characterization of the behavior of an ideal type, the homo economicus. According to this doctrine, traditional or orthodox economics does not deal with the behavior of man as he really is and acts, but with a fictitious or hypothetical image. It pictures a being driven exclusively by ‘economic’ motives, i.e., solely by the intention of making the greatest possible material or monetary profit. Such a being does not have and never did have a counterpart in reality; it is a phantom of a spurious armchair philosophy. No man is exclusively motivated by the desire to become as rich as possible; many are not at all influenced by this mean craving. It is vain to refer to such an illusory homunculus in dealing with life and history.”

More recent criticism questions the role of rationality in human behavior not only in economics but more generally:

“Humanity’s achievements and its self-perception are today at curious odds. We can put autonomous robots on Mars and genetically engineer malarial mosquitoes to be sterile, yet the news from popular psychology, neuroscience, economics and other fields is that we are not as rational as we like to assume. We are prey to a dismaying variety of hard-wired errors. We prefer winning to being right. At best, so the story goes, our faculty of reason is at constant war with an irrational darkness within. At worst, we should abandon the attempt to be rational altogether.

“The present climate of distrust in our reasoning capacity draws much of its impetus from the field of behavioural economics, and particularly from work by Daniel Kahneman and Amos Tversky in the 1980s, summarised in Kahneman’s bestselling Thinking, Fast and Slow (2011). There, Kahneman divides the mind into two allegorical systems, the intuitive ‘System 1’, which often gives wrong answers, and the reflective reasoning of ‘System 2’. ‘The attentive System 2 is who we think we are,’ he writes; but it is the intuitive, biased, ‘irrational’ System 1 that is in charge most of the time.

“Other versions of the message are expressed in more strongly negative terms. You Are Not So Smart (2011) is a bestselling book by David McRaney on cognitive bias. According to the study ‘Why Do Humans Reason?’ (2011) by the cognitive scientists Hugo Mercier and Dan Sperber, our supposedly rational faculties evolved not to find ‘truth’ but merely to win arguments. And in The Righteous Mind (2012), the psychologist Jonathan Haidt calls the idea that reason is ‘our most noble attribute’ a mere ‘delusion’. The worship of reason, he adds, ‘is an example of faith in something that does not exist’. Your brain, runs the now-prevailing wisdom, is mainly a tangled, damp and contingently cobbled-together knot of cognitive biases and fear.

Not so foolish:  We are told that we are an irrational tangle of biases, to be nudged any which way. Does this claim stand to reason? Aeon Magazine (Sept. 22, 2014)

“Although there have been many critics of the theory of homo economicus, the idea that economic actors behave in their own self-interest remains a fundamental basis of economic thought.”[3]

If the shoe doesn’t fit, why do we keep wearing it? And to what end? More next time.

[2]  The image above is from this article.