“Like humor and satire, utopias throw open the windows of the mind.” 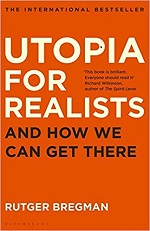 Continuing  with Rutger Bregman’s analysis of utopian thinking that we began last week:

“Let’s first distinguish between two forms of utopian thought. The first is the most familiar, the utopia of the blueprint. Instead of abstract ideals, blueprints consist of immutable rules that tolerate no discussion.

“There is, however, another avenue of utopian thought, one that is all but forgotten. If the blueprint is a high-resolution photo, then this utopia is just a vague outline. It offers not solutions but guideposts. Instead of forcing us into a straitjacket, it inspires us to change. And it understands that, as Voltaire put it, the perfect is the enemy of the good. As one American philosopher has remarked, ‘any serious utopian thinker will be made uncomfortable by the very idea of the blueprint.’

“It was in this spirit that the British philosopher Thomas More literally wrote the book on utopia (and coined the term). More understood that utopia is dangerous when taken too seriously. ‘One needs to be believe passionately and also be able to see the absurdity of one’s own beliefs and laugh at them,’ observes philosopher and leading utopia expert Lyman Tower Sargent. Like humor and satire, utopias throw open the windows of the mind. And that’s vital. As people and societies get progressively older they become accustomed to the status quo, in which liberty can become a prison, and the truth can become lies. The modern creed — or worse, the belief that there’s nothing left to believe in — makes us blind to the shortsightedness and injustice that still surround us every day.”

Thus the lines are drawn between utopian blueprints grounded in dogma vs. utopian ideals arising from sympathy and compassion. Both begin with good intentions, but the pull of entropy is stronger with the former — at least, so says Rutger Bregman, and he’s got good company in Sir Thomas More and others. Blueprints require compliance, and its purveyors are zealously ready to enforce it. Ideals on the other hand inspire creativity, and creativity requires acting in the face of uncertainty, living with imperfection, responding with resourcefulness and resilience when best intentions don’t play out, and a lot of just plain showing up and grinding it out. I have a personal bias for coloring outside the lines, but I must confess that my own attempts to promote utopian workplace ideals have given me pause.

For years, I led interactive workshops designed to help people creatively engage with their big ideas about work and wellbeing — variously tailored for CLE ethics credits or for general audiences. I realized recently that, reduced to their essence, they employed the kinds of ideals advocated by beatnik-era philosopher and metaphysicist Alan Watts. (We met him several months ago — he’s the “What would you do if money were no object?” guy. ) 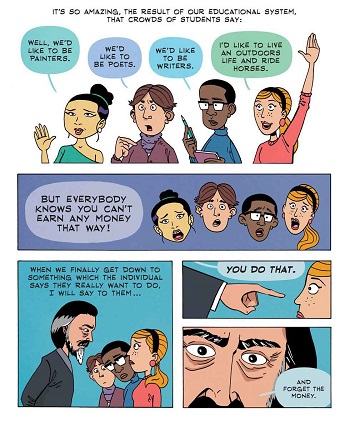 The workshops generated hundreds of heartwarming “this was life-changing” testimonies, but I could never quite get over this nagging feeling that the participants mostly hadn’t achieved escape velocity, and come next Monday they would be back to the despair of “But everybody knows you can’t earn any money that way.”

I especially wondered about the lawyers, for whom “I hate my job but love my paycheck” was a recurrent theme. The Post WWII neoliberal economic tide floated the legal profession’s boat, too, but prosperity has done little for lawyer happiness and well-being. True, we’re seeing substantial quality-of-life change in the profession recently (which I’ve blogged about in the past), but most have been around the edges, while overall lawyers’ workplace reality remains a bulwark of what one writer calls the “over-culture” — the overweening force of culturally-accepted norms about how things are and should be — and the legal over-culture has stepped in line with the worldwide workplace trend of favoring wealth over a sense of meaning and value.

Alan Watts’ ideals were widely adopted by the burgeoning self-help industry, which also rode the neoliberal tide to prosperous heights. Self-help tends to be long on inspiration and short on grinding, and sustainable creative change requires large doses of both. I served up both in the workshops, but still wonder if they were just too… well, um…beatnik … for the law profession. I’ll never know — the guy who promoted the workshops retired, and I quit doing them. If nothing else, writing this series has opened my eyes to how closely law practice mirrors worldwide economic and workplace dynamics.  We’ll look more at that in the coming weeks.